The pond digger has been experimenting with pumps in the indoor koi tanks and has created some nice water circulation at different levels which the koi appear to like. After doing a little research, he thought that adding a tangential pond return in the lower pond would be a good idea. Since we were already set to do some spring cleaning of the pond, what’s moving
the rocks for the 500th time, straightening out the pond liner and more??? I must admit the end result is looking pretty good. The pond will be put back together later this week and we will probably put two koi in to help the filtration system get going. Eventually the 15 left from the start of winter 2014 will spend early spring out here until their pond is open. We didn’t do too well this winter, losing six koi in the outdoor pond 😦 I’m still quite disappointed that my favorite little koi, Hato, died.

Aside from spring pond cleaning (a little video is included below), I secured some pond lights to larger rocks for the lower pond and picked up some of the moss with the hopes of reviving these patches.

The seventeen little koi are all doing quite well. I like to name our koi because it helps me to distinguish them in the pond. The pond digger didn’t like Fidel and Che, so those two koi have been renamed Francis and Claire (as in the Underwoods from the Netflix series, House of Cards). The kujaku and doitsu kujaku have been dubbed Jamaica and Jamocha – I like using the similar consonant sounds. Jamocha reminds me of my father’s favorite ice cream from baskin robbins “jamoca almond fudge”. The pond digger is a fan of BBC’s Musketeers series so we have named the hiutsuri D’Artagnon and the goshikis Athos, Porthos and Aramis. I think the platinum ogon will be Snowflake but haven’t decided for sure. 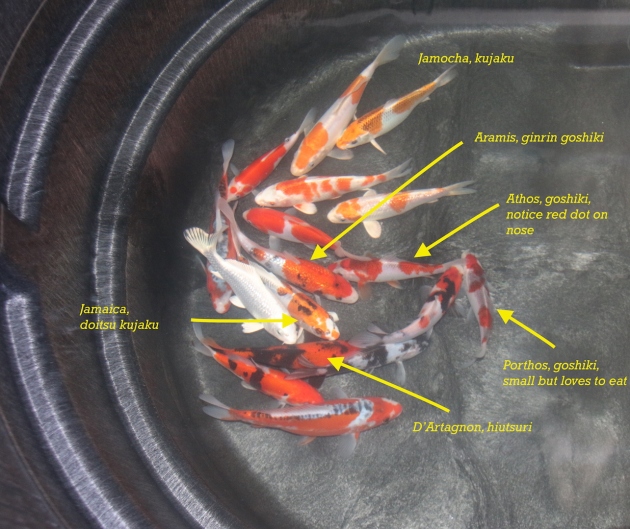 So another busy weekend working on the koi ponds… it never seems to end but the pond digger assures me that we will be doing a lot more relaxing this summer…after he has the upper pond made deeper by two feet!