Lots to catch up on – the koi show, landscaping around the pond and the dahlia garden. This past weekend we had the Upper Midwest Koi Club annual show in Minneapolis. I co-chaired the show with another club member, Ben Brown. I couldn’t have asked for a better person to work on the koi show. Our two AKJA judges were Pam Spindola and Luanne Porter.

I brought in a few koi to show and my little asagi did the best out of my group. Her name is Jane (we used to have a nice asagi named Tarzan that also won Young Champion B, but I think it died from stray current). Jane was purchased as a little tosai at the 2017 Louisville Koi and Goldfish Show from Devin and Mikki Swanson. Jane has grown very well this year and currently has some nice straight rows of scales, mirror hi on each side and a fairly clear head. We can only hope that she will keep these attributes as she grows. This asagi won the Young Champion B award which is a flag with a photo of your koi. Natsumi, the shiro utsuri received best in variety and tategoi – I guess I’ll need to bring her back after she fattens up some more. Natsumi was introduced to me via Mikki Hernandez Swanson. Mikki knew that I liked shiro utsuris and said – how about this one? She spent a summer in the Koi Acres mud pond and came home in Spring 2016. Last year, I was going to bring her to the show but Mayhem ( a male kohaku) chased her into the skimmer, trying to spawn and she was injured.

Deciding which koi to take to a show is not easy. Sometimes the ones you want to take are small for their size division (and size does count…) or a koi will not look too good for some reason or they’re too quick to catch and you have to leave. I picked out seven koi that looked very healthy, pretty nice shape, nice skin and I just wanted to show them. I like to show koi that I have cared for since they were tosai koi. 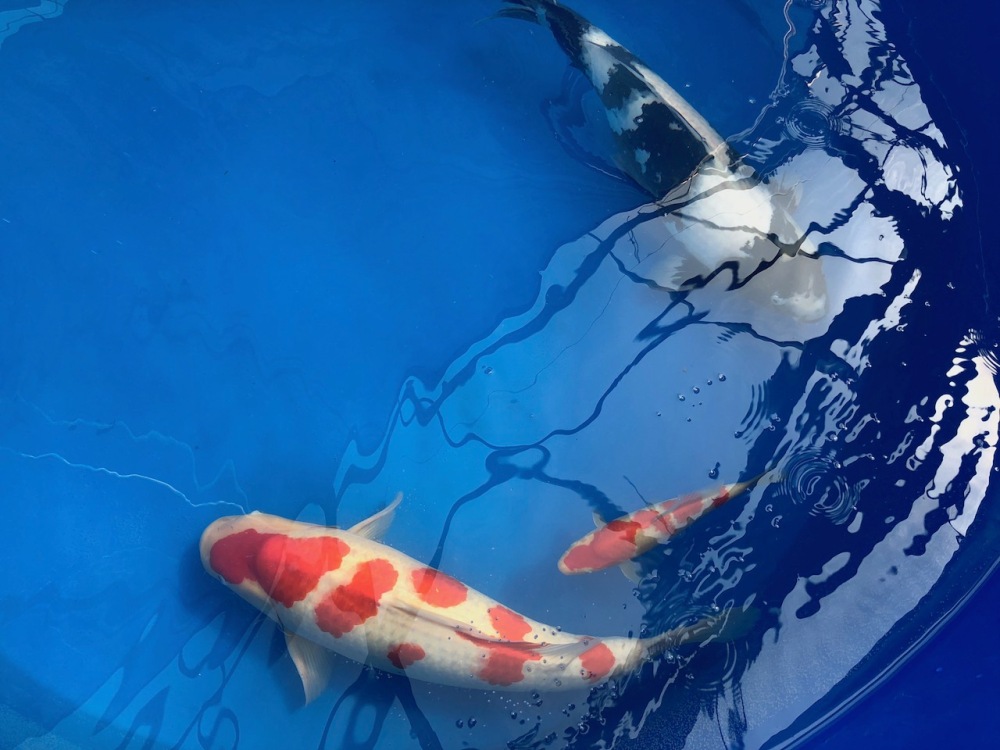 One of my favorite things during the koi show is buying stuff that I think I might need (or not). Pond builder and I try to limit the amount of stuff we accumulate but some objects are irresistible. Take for instance another basket – I really like the rectangular one and I have two round ones already. Just seemed like something I might use. And who wouldn’t want a measuring thingy in centimeters? Southwest Koi and Goldfish always have something for me to buy. I was really pleased that Mike Weynschenk and Travis Bottles finally made it out to our pond. We use a number of things purchased from them – like the giant koi net that makes it pretty easy to catch koi. 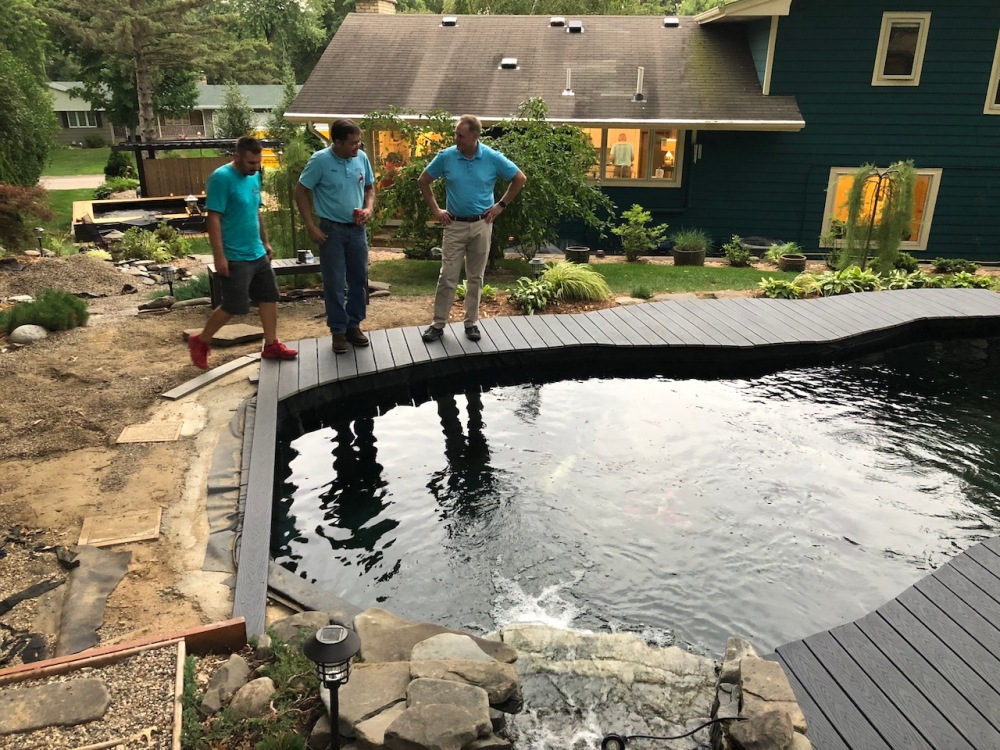 The pond builder worked very hard to complete the boardwalk before a dinner we had on the first night of the show. Unfortunately he was only able to get two of the sides done. That’s okay though since we aren’t really sure how we are designing the large end and there’s more concrete that needs to be put down. 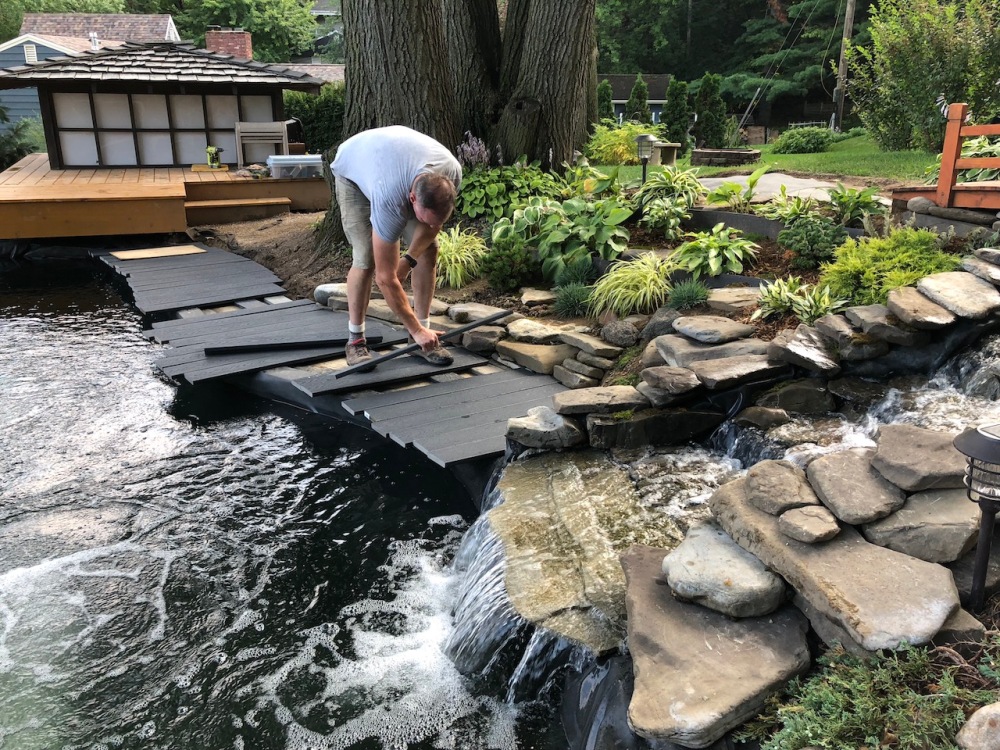 He did complete the rework on the waterfall and placed the evening light back into the water. He’s planning on building a bakki shower with the rio media he purchased from Southwest Koi. I’m pretty sure the bakki shower is not needed for the upper pond since the waterfall produces a lot of oxygen. Check out these photos I took today of the waterfall water. Lots of bubbles!

Since my work around the pond is pretty much done for the time being, I am able to pay more attention to my dahlias. They’re growing well and it’s interesting to see new varieties bloom. Many of my tubers were from Bulldog Dahlias and it just so happens that he does a little catering on the side. Over some delicious pulled pork, we talked about my new dahlias this year and the truly pesty japanese beetles. The beetles love my birch trees, raspberries, zinnias and dahlias. Chad recommended that I go out with a little container of soapy water and go after the japanese beetles. I must say it’s very satisfying to destroy a handful of beetles each day.

I don’t feel sorry one bit since they come after some very pretty flowers. I could take photos of my flowers every day. When I’m picking them over for pests, I will find cute little green frogs and we have a lot of good visitors like honeybees, butterflies and hummingbirds. 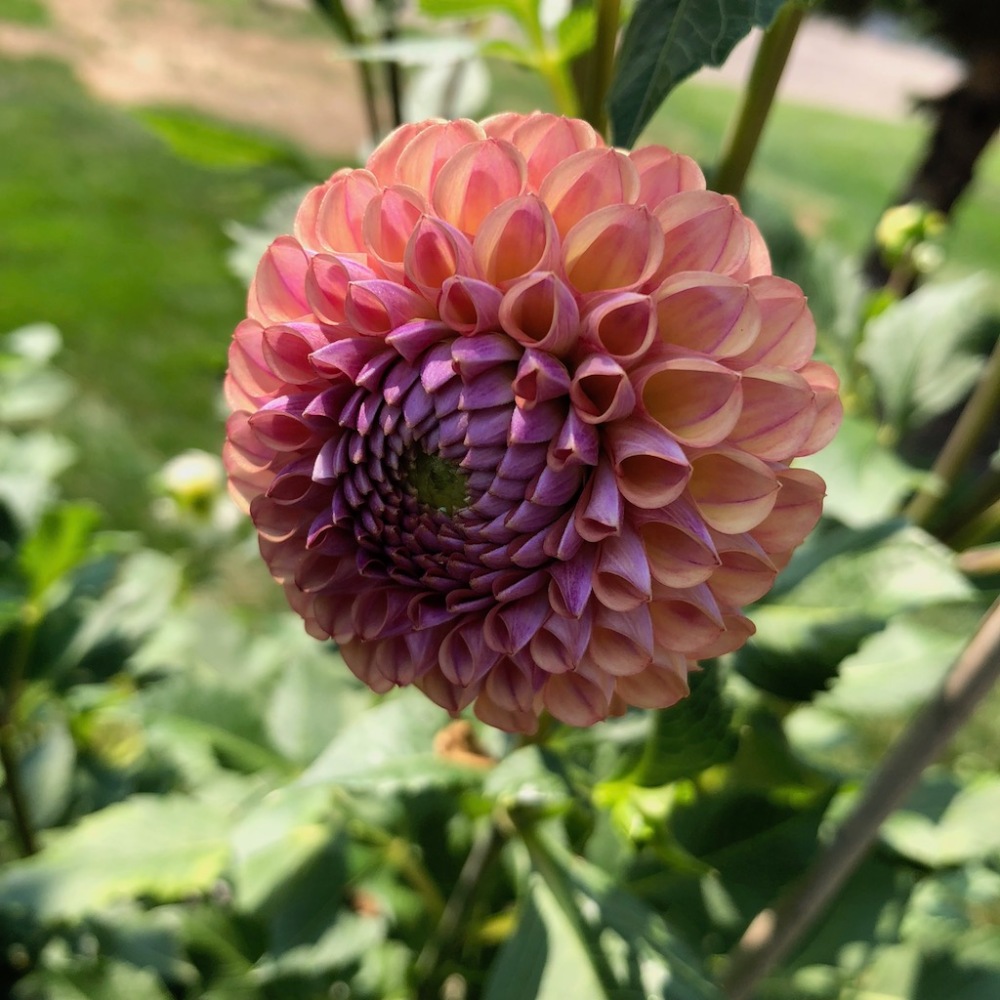 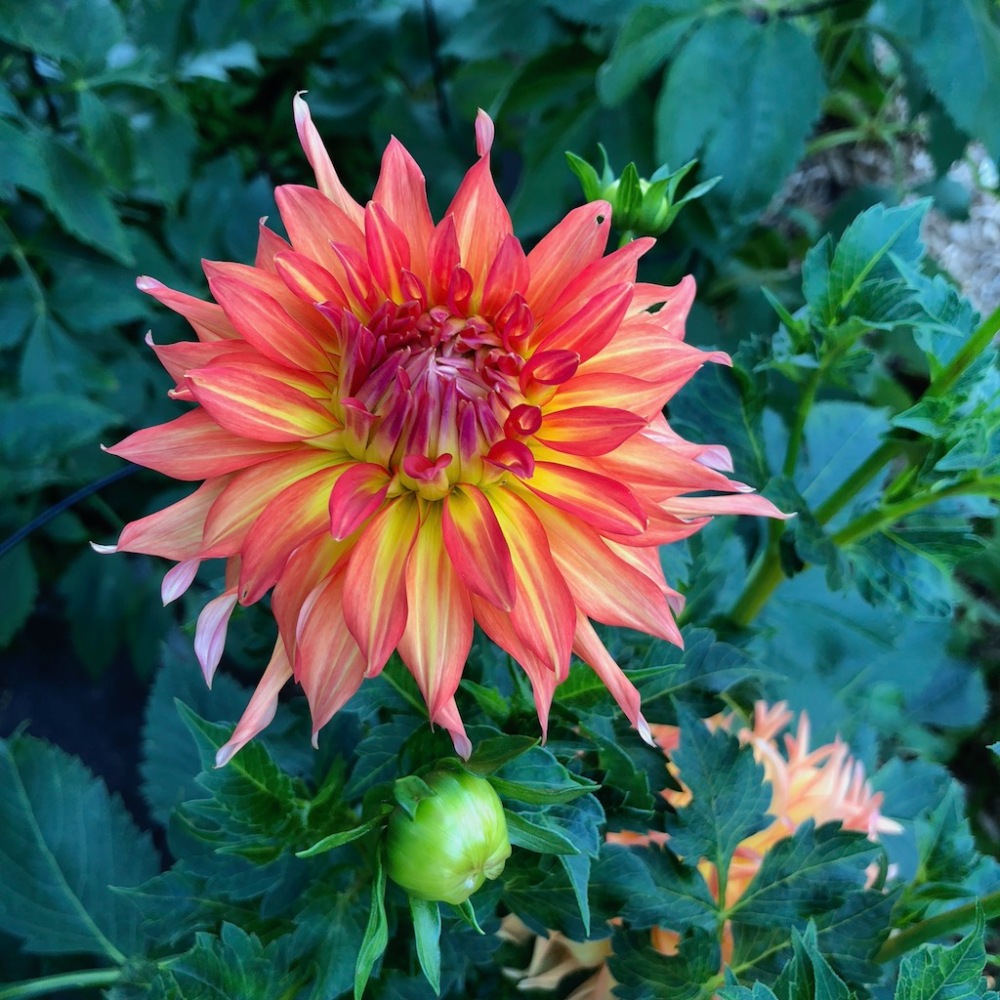 I also love to take photos of koi scales. There are so many variations and patterns – the hard part is playing with the DSLR settings to catch a clear, focused photo on a moving object. I read somewhere that if you put the koi in cooler water, it will move less. I hope to take scale photos of some of my koi as they develop. Maybe I’ll find some clues that will help me pick better young koi 😂!