We’re working hard to keep the koi numbers down in Little Siberia. This year I selected five koi to sell/rehome. A young lady bought one of the smaller koi and she was so nice, we also gave her the kohaku listed.  We were going to sell Lily, a very large shiro utsuri but decided to designate her as a Normandale Japanese Garden donation. Our ginrin showa was purchased by a member of the Koi Keepers of North America (KKONA). It’s always nice to know that your koi is going to someone who wants to take good care of koi (and you might see a photo or two on Facebook). Since our buyer was interested in bakki shower media, we had about 3 boxes of new and used media hanging around in the shed to share. The pond builder always loves to buy new media and sometimes it works out for us and sometimes it doesn’t. Now we have more room in the shed to get something else 😂. Being able to rehome a few items keeps down the clutter all koi keepers have with random parts that “might be needed someday”. We definitely did not need a 8×10 pop up pond net (I think someone gave it to us) but our buyer thought it could cover a portion of his pond. So we threw it in the back of the truck as well.

Our home koi collection now stands at 24 koi. Eleven (plus the soon to be donated) koi in the lower pond sharing 5000 gallons and thirteen in the upper pond of 12,000 gallons. Once the koi reach 20 inches, they are moved to the upper pond. I’m sure we’ll have to think about downsizing some koi again next year. It gets harder the longer you keep them….

My daughter was visiting me for a few days so we checked out two local japanese gardens and did a lot of gardening at home with the pond builder.

I think the Normandale Japanese Garden in Bloomington is prettier than the one located in the conservatory. Primarily Austrian pines, assorted bushes – and a pond with koi.  Of course, we’re partial since we donated four koi last year and we’ll have another one going in soon.

We are pleased that the koi made it through this past winter. I was worried that winter was too cold and too long but they all look healthy and happy in their new home.

Back home, we worked primarily on a hillside that used to be grass, a waterfall, an eyesore and most recently an herb garden.  We loaded in a few new pines, azaleas and some plants from around the yard. Our hopes are that in a few years, the plants will be much fuller and ready for some niwaki action. For now, we’ve filled in the gaps with hosta (which grows like a weed around here), moss, scotch moss, Irish moss, hakone grass and Jacob’s ladder. We have a switchback rock path that we may redesign next year. 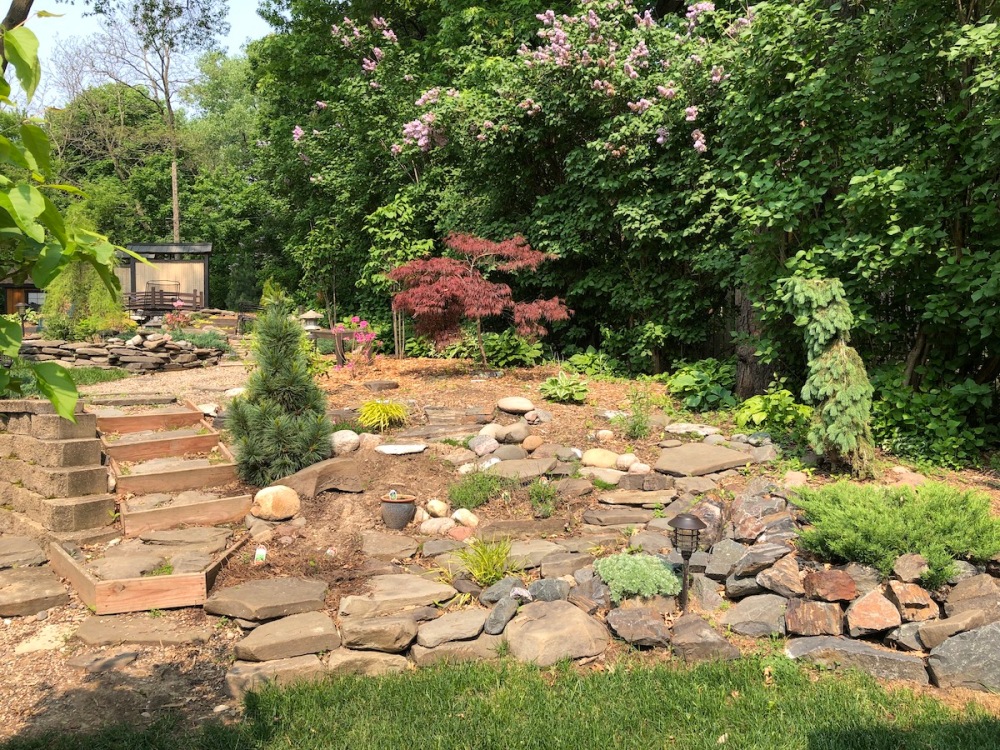 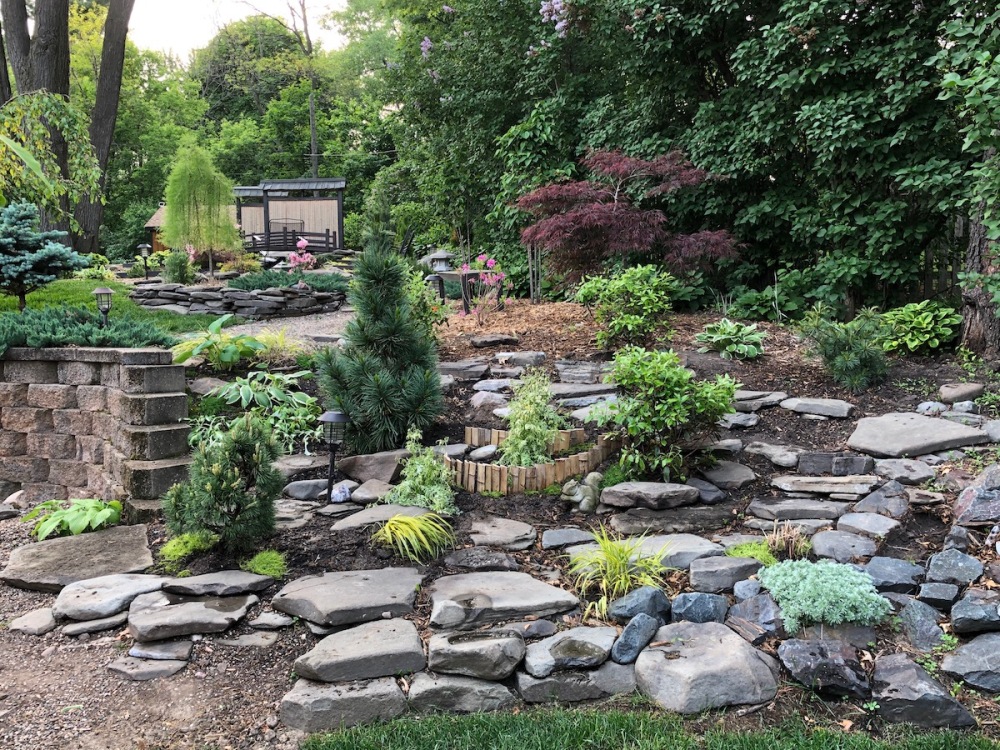 We also moved around the magnolia that were struggling and added two interesting trees:

I have been looking for the scotch pine since early spring, calling around to nurseries, checking at the tree farm etc. My daughter was planting a new fern garden and annual garden for me so we decided to visit a nursery about two miles from my home. Voilá – two fairly large specimens, trimmed in a topiary style, sitting out front.  I really love this pine and it will need some of the candles trimmed so I’m busy googling and reading about pruning pines. The pond builder recommended we just go back and buy the other French Blue scotch pine since this one was so interesting. Unfortunately the other pine did not look quite nice and it had a damaged branch. So we opted for a weeping birch that has been trained in a S-shape.

A very satisfying few days in the garden. Gardening is a pleasure and just enhances our koi keeping experience. Two of my favorite quotes about gardening are:

“The true meaning of life is to plant trees, under whose shade you do not expect to sit.” – Nelson Henderson

“To plant a garden is to believe in tomorrow.” – Audrey Hepburn

Good thing my pond builder is an excellent gardener as well. He’ll say he’s just good at digging holes but he’s a pretty good caretaker too. Too bad the koi can’t see the garden. They are probably just wondering when is someone going to throw them some more JPD food!