December is always a busy month and I’ve been a little lax about posting. We lost one of our smaller koi the other day. A little showa named Marius who had actually been acting oddly for a few weeks now. Not sure why Marius died since the koi looked pretty good – no fungus, no lesions, no funny spots. We also had two koi that had to be taken out of the pool recently and placed in a sick bay bowl for a few hours. We think the movement in the pond from the aerator was a bit much for the koi. As soon as we switched to smaller aerators, all the koi seemed to swim around a lot more. The two stressed koi have been returned to the winter pool and one is doing great. The other, we’ll have to wait and see.

The pond digger made a few improvements to the winter pool. We have been struggling with the water parameters for some time and he decided to order a new top to the bead filter. We had purchased the bead filter used and when it had been refurbished, the top had been put on 180 out. So we thought we had it right but a new top and new gasket made a dramatic difference in the water parameters. The nitrites have finally gone down, not perfect but pretty close. He also put in a bottom drain since the drain we originally put in the pool was not able to pull out all the wastes effectively. 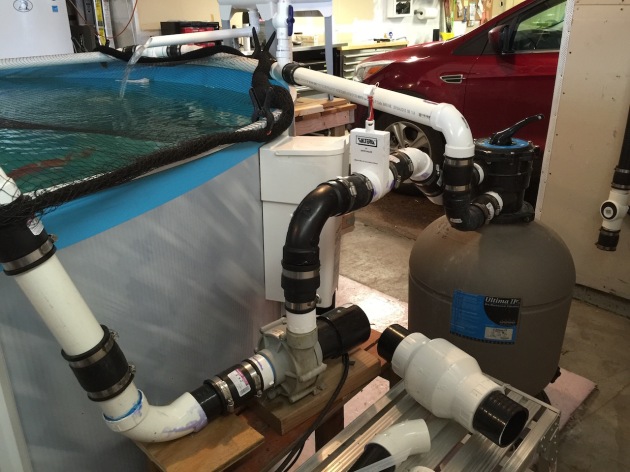 The pond digger’s creative task was building a shower type of filtration unit to mimic a bakki shower. Some of the water is circulated through PVC piping, into a plastic container where it then showers down on to some media and finally into the pond. We’re not sure if the temperature in the garage will allow bacteria to grow on the media. In the video clip, you will see his creation. 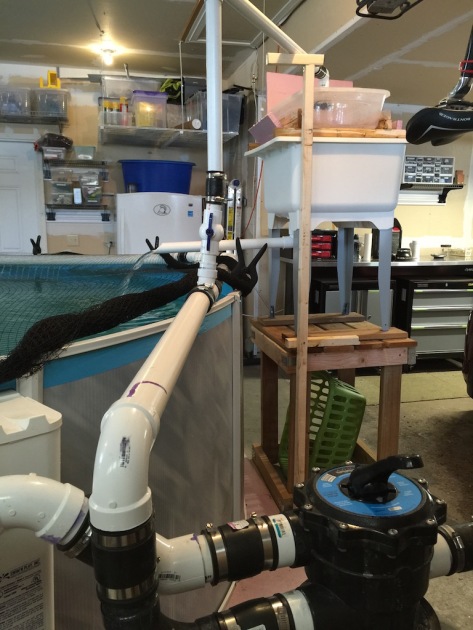 A rather short post but winter is just not very exciting around here.