During the spring and summer, the pond builder and I are busy practically every weekend doing something related to the garden, the ponds or the koi. This is the time of the year where things slow down and we’re actually looking around for things to do. We should be getting our garage ready for the winter pool but that’s on hold until the concrete work gets done. We did take a run out to Koi Acres this morning to pick up a new RDF. We purchased the small 45/40 to use with the indoor pool this winter.

We had moved all the koi together into the lower pond and the largest koi were scaring the bejeebees out of us by acting bizarre. The three largest shiro utsuris looked stressed, were breaching the surface and I really thought one could have an unlucky jump and hit the side. Testing the water, showed a rise in ammonia which was expected since we more than doubled the load of koi. We salted the pond, did a huge water change and threw in some broad spectrum for good measure. Maybe the big girls were just annoyed going from 11000+ gallons to 5000 gallons and koi everywhere. We moved them back to the upper pond where they seem more relaxed.

Based on the struggling koi, the pond builder suggested we should probably move the lower pond’s RDF into the garage for the winter pool. Our koi are larger and we want to ensure we have enough filtration. Moving an RDF did not sound like a good idea to me…we opted to purchase a new, small RDF. It sounds easy enough to say ‘let’s just move the RDF’ but in reality, it never works out that way. In November, we’ll set up the pool and start running the system. I’m going to try moving the four big girls in first and let them have the pool to themselves for at least a week. Maybe some extra salt… Then we’ll start bringing in the rest of the koi over a few days. Less stress? Crossing my fingers.

Since the koi will be in the lower pond a little longer this year, we put some clear vinyl on top. For less than $50 we have a covering that will hopefully keep the pond a little warmer, longer – and keeps out all the leaves. Some translucent, plexiglass sheets would have been nice, but for a few weeks, it’s just not worth it.

The kuchibeni koi who came home yesterday are staying inside the skimmer. Dumber than rocks and scaredy cats. I really should name them but I’m waiting until next week when I might be getting a friend’s showa, that happens to be a kuchibeni. 😍 It’s all rather silly but I enjoy strange looking koi. 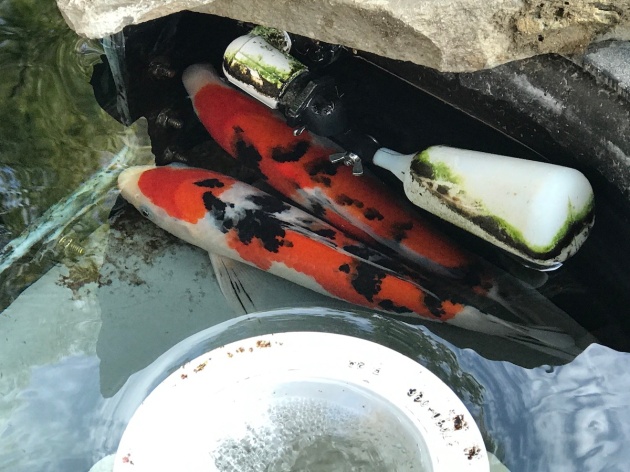 It’s cold and rainy outside so not much left to do. I have a goshiki growout contest with two other koi friends and we’ll be comparing our koi next Saturday. I believe we decided that the koi with most growth would win $20 from the other players. I’m pretty sure the one who says “oh mine hasn’t grown much…” will come in with a whopper. We’re going to be comparing how much growth we each got and what type of feeding regimen we followed. I think my little guy is doing well, at least he isn’t fertilizer! Koi that look bad end up being fertilizer in our yard. I know it seems heartless but they’re just taking up water space and eating expensive food. I do try to rehome some of the koi.

In a few weeks, many of the US koi dealers will be heading to Japan for their harvests and a lot of new koi will be coming up for sale. Hopefully I’ll be posting photos of koi coming home in a few months! I’m looking for the 12-16″ koi that are less of a gamble than tosai and you can enjoy “growing” the koi. Buying the finished 28+ inch koi is not my style (or in my budget!)…yet 😉